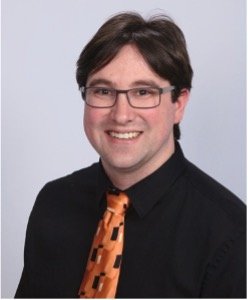 Scott Flanagan is our speaker on March 8, 2022. Scott is originally from Longmont, Colorado, and moved to Fremont, Nebraska, in August of 2003 to attend Midland Lutheran College. In 2007, he graduated from Midland with a Bachelor of Science Degree in Business Administration with concentrations in marketing and management. While in college, he took a part-time job at Country Traditions, and following graduation, he accepted a full -time position at the store and became the Creative Center Coordinator, with his main focus on Pfaff machine sales and educating staff and customers about the machines. He teaches Pfaff owner classes, along with many of the machine technique and machine quilting classes at Country Traditions.

Scott’s love of quilting started with his grandmother, but he comes from a family of crafters and woodworkers. He and his grandmother spent many hours at the sewing machine piecing fabric together for quilts for Lutheran World Relief. Scott’s quilting journey spans more than 20 years, and his quilt collection contains more than 150 quilts, and has made more than 300 quilts. He loves to make special quilts for family and friends, sometimes for no reason at all, partly for the joy it brings him and to see the reaction when the quilt is received.

In 2011, Scott started his own pattern design company, “4th and Main Designs by Scott Alan Flanagan”, and spends much of his free time designing quilt patterns exclusively for Country Traditions. He loves the endless possibilities available when designing patterns, and is excited when putting together a project that he has designed. His imagination and creativity led him to win 2nd Place at Pfaff International Convention in 2010 and also Viewers Choice Award at the Prairie Piecemakers Quilt Show in 2010. In 2013 He Won 1st Place in the Applique Division at Pfaff International Convention in Orlando FL with his Quilt titled “Midnight Garden.

When asked what his favorite part of quilting is, his response sums it up, “All of it, from designing, to cutting, to piecing, to quilting, to binding. It is all part of the creative process and by skipping a step it feels as though part of the project is missing.”

We meet the second Tuesday of each month from 6:30-9pm at Faith Community Lutheran Church at 9775 Ute Highway, Longmont, CO
View Map & Directions